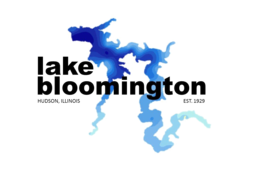 The Pumping Plant, which sits just southeast of the dam, was built to soften and purify water and pump it through 24-inch pipes 14 miles to the city reservoir. The original plant is built in rural Italian style architecture and has the lines of an ancient castle. In 1986 the plant was expanded, with architecture to complement the original, to double the plant capacity to 24 million gallons of water a day. The new clarifier building became operational in 2000 and a new 30 foot transmission main is underdevelopment and should be completed soon. From across the lake, the water plant tower and turret are constant reminders of the purpose and beauty of Lake Bloomington.

Many area residents mistakenly assume that the steel tower standing alone near the southwest end of Lake Bloomington is an abandoned fire watch platform erected by the U.S. Forest Service or another government agency, presumably in the distant past. It has even become a local urban legend of sorts.

In truth, the tower’s purpose involved not terra firma but rather the wild blue yonder. Some 75 years ago, the federal government erected the tower to support a revolving beacon used to help passing aircraft navigate the nighttime skies. This beacon, as well as others in Central Illinois and beyond, offered solace to pre-radio era pilots who sometimes found themselves hurtling through the inky blackness on a wing and a prayer.

On Sept. 22, 1939, the Bloomington City Council agreed to lease a patch of Lake Bloomington ground less than one-quarter acre in size to the Civil Aeronautics Authority (later Administration) for $1 per year. Federal officials then saw to the erection of the tower and installation of the beacon by year’s end.

The Tower Beacon Light, called "The Pylon" was installed on a tower at Lake Bloomington in the fall of 1939 and was used for 11 years. The 75 foot tower still stands on a 200 square foot site west of Hickory Basin and 1000 feet north of the bridge over that basin. The Lake Bloomington beacon was one of a series installed along the St. Louis-to-Chicago air route in 1939 and 1940. Lake Bloomington’s tower beacon carried the designation “14, SL-C Airway,” meaning it was the 14th such beacon between St. Louis and Chicago.

The revolving beacon was one in a string of seven beacons between Joliet and Springfield installed to create a more direct "lighted route" for night flying between Chicago and St. Louis. The beacons helped pilots avoid the longer "dog-leg" route via Peoria and in good weather were visible to pilots at a distance of 18-20 miles. After the beacons was no longer used, it was fitted with a green lens, and reinstalled at the Morris, IL airport.

On occasion, this beacon tower would make local news. For instance, during an August 1942 area-wide blackout drill (this being World War II), the beacon drew complaints from some local residents, as did the lights from the WJBC radio tower (though for civilian defense officials, the most galling lapse involved a Bloomington beauty shop and its neon sign left brightly buzzing for all but two minutes of the blackout).

Although the Lake Bloomington tower has been a familiar, if lonely, sentinel for area residents over nearly three-quarters a century, it served as a beacon platform for a mere one short decade.

In the fall of 1950, the Civil Aeronautics Administration removed the Lake Bloomington beacon as well as all others along the St. Louis-Chicago route. Art Carnahan, manager of Bloomington Municipal Airport, explained to The Pantagraph that the beacons had become too expensive to maintain, especially since most nighttime aircraft were now equipped with radio, making these “inland lighthouses” mostly obsolete.

According to one account, the Lake Bloomington beacon ended up at Bloomington Municipal Airport (now Central Illinois Regional Airport, or CIRA), though how it was used and for how long is unknown.

The Civil Aeronautics Administration canceled its Lake Bloomington lease and the city took possession of the now-beaconless steel tower on June 30, 1952. There was talk of moving or even re-purposing the tower, but with a cost estimate for such a job running upward of $1,500, city officials instead decided to leave the tower “as is,” at least for the time being.

“As yet no one has come up with a use for the tower,” noted The Pantagraph on June 29, 1952, “but city officials are confident they will find something better to do with it than letting it remain a bird roost.” Yet more than 60 years later, the tower has remained little more than a bird roost — albeit one with an interesting story, whether real or imagined!

Local folks interested in seeing a revolving beacon firsthand are in luck. The Prairie Aviation Museum, located on Route 9 next to Image Air and CIRA, includes an outdoor working display of one such beacon on its “Air Park” grounds.

In September 2013, volunteers completed the beacon’s installation atop an ingenious miniature tower. This beacon, though, is newer than the one that for the better part of a decade promised safe passage to pilots coursing through the dark skies above Lake Bloomington.

Today the tower welcomes visitors to the lake with an American flag- and is sometimes decorated for the season.

The Hubbard Gate, at the original entrance to Lake Bloomington near the pumping plant, was built in 1929. A bronze plaque at the gate, dedicated in 1931, bears the likeness of Dr. Silas Hubbard. The inscription reads: "In memory of Silas Hubbard, family doctor throughout this region, 1855-1900."

Within the old entrance, a seat of stones forms a memorial to Dr. Hubbard's son, Elbert Hubbard, and Melvin Stone, both born in Hudson. Stone was a renowned journalist and Elbert Hubbard was one of America's most distinguished literary figures. It has been said that more copies of Hubbard's essay, "A Message to Garcia," were sold than any other work except the Bible.

The inscription on the memorial has the Associated Press insignia beneath Stone's name and the Roycrofter Press symbol beneath Hubbard's name, to signify the organizations they were involved with during their adult years. Below is carved, "The Money Creek valley was their boyhood playground."