The early settlers, following Indian trails in their search for home sites, explored the beautiful timbered valley through which meandered the spring-fed stream, later to be called Money Creek. Nearby, the prairie grass grew higher than a horse's back and later the settlers found that when set in a high wind, fire traveled faster than a horse could run. In the timber, the settlers found the friendly Kickapoo Indians who shared their food and offered shelter in their wigwams.

Today, in that same timber where Money Creek feeds Lake Bloomington, neighbors take time to be friendly, youth enjoy the wholesome recreation of the open spaces, and friends meet beneath oak and maple trees like those under which the Indians and settlers made peace a century and a half ago.

Lake Bloomington was built with the expressed purpose of providing ample, quality water for the City of Bloomington, but it was recognized by the planners that it could also be developed as an attractive residential and recreational area.

During 1926-1928 the Daily Pantagraph was well aware that Bloomington had the hardest water in the state and lobbied extensively in favor of building a lake to solve the problem. In 1928, the citizens of Bloomington voted 4411 to 2316 to contract a private corporation, later called the Bloomington Water Company, to carry out the lake building project.

The Reverend Frank Breen, reminiscing about the project, said, "The dam was completed in 1929 but the lake didn't fill until the spring of 1930. Between times doubters all said 'we told you so, that little old Money Creek will never fill that basin.' But in the spring of '30 we had a heavy rainfall on top of a lot of snow and the lake filled almost by magic. And it was full."

The Lake, with a capacity of over 2 billion gallons of water, was completed and dedicated in 1930. In 1957-58, the capacity of the Lake was increased 50% by a five-foot addition to the dam.

Today the 3 mile long lake covers a total of 640 acres and has 18 miles of shoreline containing over 200 residences. Its shores also support 6 park areas, 3 major camps, the Mucky Duck marina, and the Lake is used extensively for fishing, boating, and water skiing. 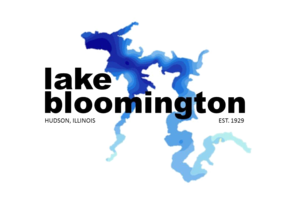